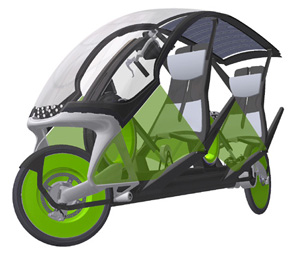 The Läufer design is characterized by the contrast between the straight lines of the frame and chassis and the soft lines of roof and fairings. All operating controls and structural knots are visually accentuated. The pedal rings will identify the Läufer as a human-powered vehicle.
Turning away from the bicycle´s modular system is another significant attribute of the Läufer design. Choosing a non-bicycle architecture allows for comprehensive parts, integrating numerous functionalities.
The Läufer colors light green, black, and silver symbolize an environmentally justifiable product concept, implemented with at high-grade industrial manufacturing and demonstrates that both can go well together.